I have a lot of keyboards a keyboard problem.

Now that everyone is staying home (you’re staying home too, right?), some friends who know about my keyboards have started asking me to give them keyboard advice. Since it’s impossible to that without a ton more context, I wrote this guide to help people figure out more specific questions they can ask about keyboards.

If you don’t really know much about keyboards, this post is some context describing the functionality of some popular keyboards, in escalating order of expense and… particularness.

On the other hand, if you want an aesthetics-focused list, I suggest jumping over to astrolokeys.com where you can read the signs as mechanical keyboards, instead of the rest of this post. 😅

I just want an external keyboard for my laptop

Fortunately this one is pretty easy. If you have a Mac, get an Apple Magic Keyboard. It’s wireless, has a layout copied from your laptop so you already know it, and is a totally reasonable keyboard.

It pairs instantly when you plug it in to your computer using a Lightning cable, and it has a built-in battery that lasts for weeks. If you leave it plugged in to your computer, it even switches over to being a wired keyboard and the delay between pushing a key and the computer showing the letter goes down.

If you don’t have a Mac, the Wirecutter recommends the Logitech K380. Seems good.

I heard ergonomic keyboards are better

If you want something that’s pretty close to the keyboard you’re already familiar with, but more ergonomic, I have heard that the Microsoft Sculpt Ergonomic is good. I’ve never used one, but maybe that’s a good way to ease yourself in to weirder keyboards? 😅 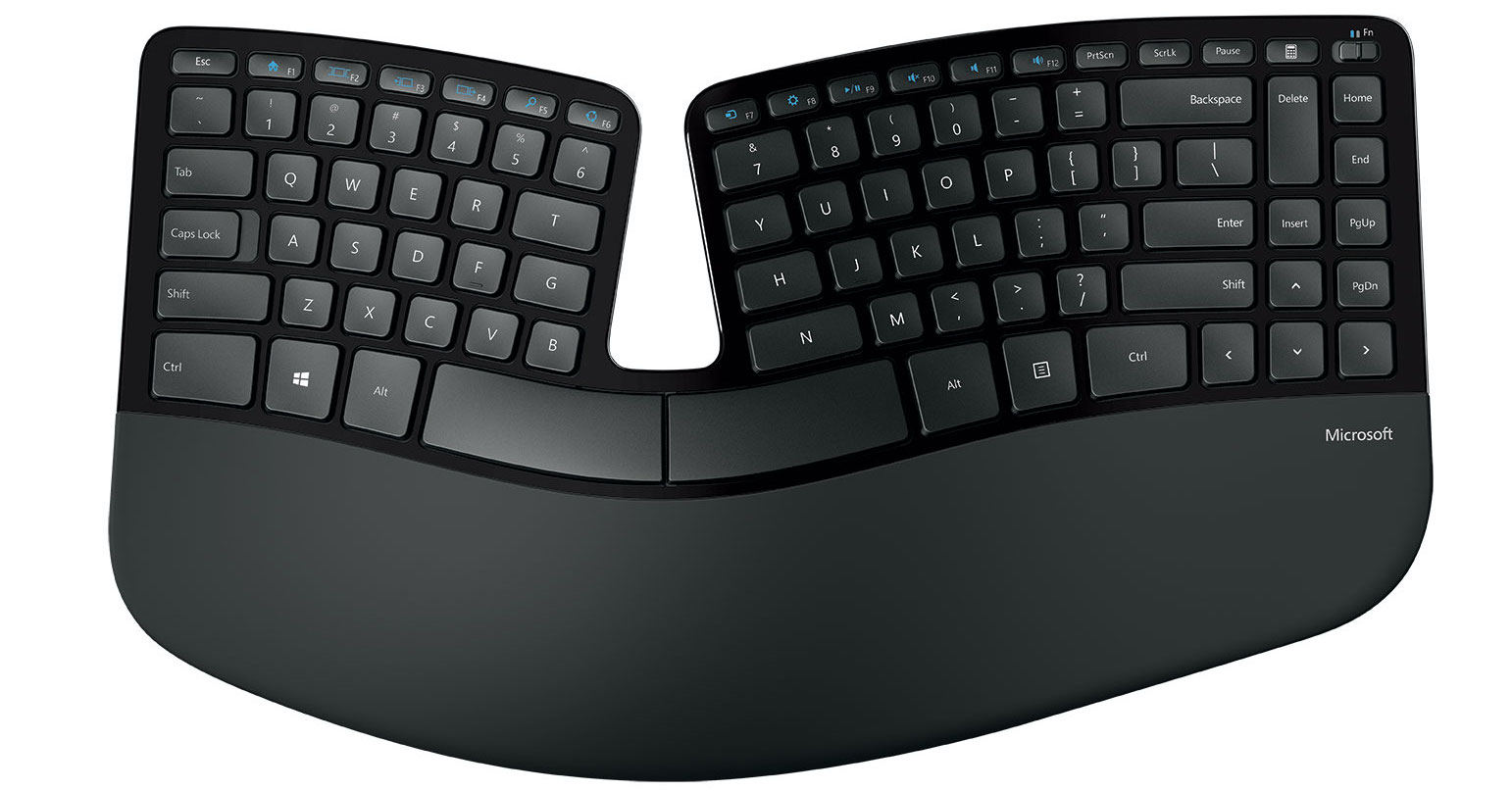 I heard mechanical keyboards are better

Maybe! Mechanical switches are generally more pleasant to type on, and last much longer. I would suggest reading the Wirecutter’s guide to “regular-shaped” mechanical keyboards called How to Shop for a Mechanical Keyboard.

If you want to give it a shot, the Wirecutter recommends the Varmilo VA87M, and I’ve heard positive things about the Filco Majestouch 2. In case you were worried about colors, there are pink versions of both! (As well as the usual black, white, and a bunch of others.) 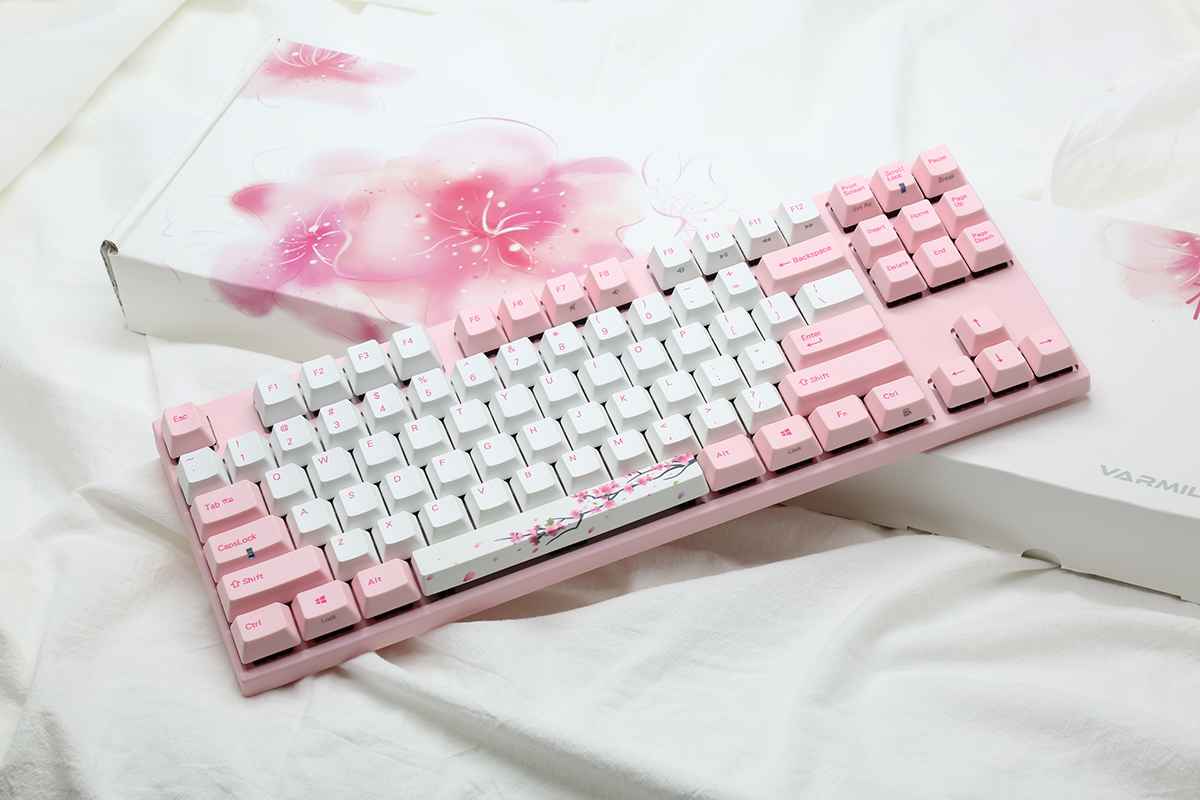 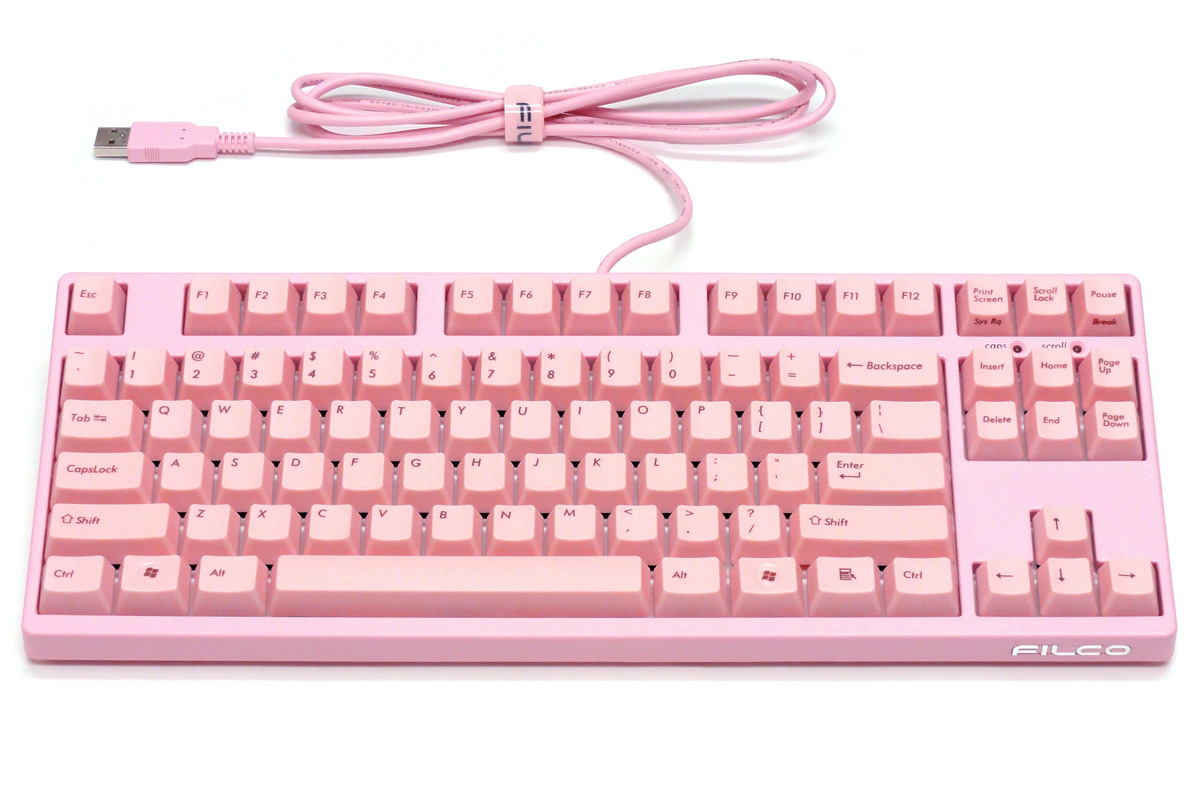 I have RSI / typing hurts sometimes

If you have RSI or you’re looking to reduce hand or wrist pain, the most ergonomic keyboard on the market is the Kinesis Advantage 2. It’s a weird shape, specifically because it’s shaped to fill in the space under and around your hands if you hold your arms out neutrally. Most relaxed and least effort to type on of any keyboard I’ve ever used in my life.

I want ultimate control and customization

They aren’t quite as ergonomic as the Kinesis, but there are two options that are still pretty ergonomic while being 100% customizable: the Ergodox EZ and Keyboard.io Model 01. Split with thumb keys like a Kinesis, but flat rather than shaped to keep your hands and arms neutral. The upside is they have open source firmware, and you can program them to do literally anything you want. Notable anythings include: multiple fn keys for many layers, single keys that press multiple other keys, one key if you tap different key if you hold, etc. 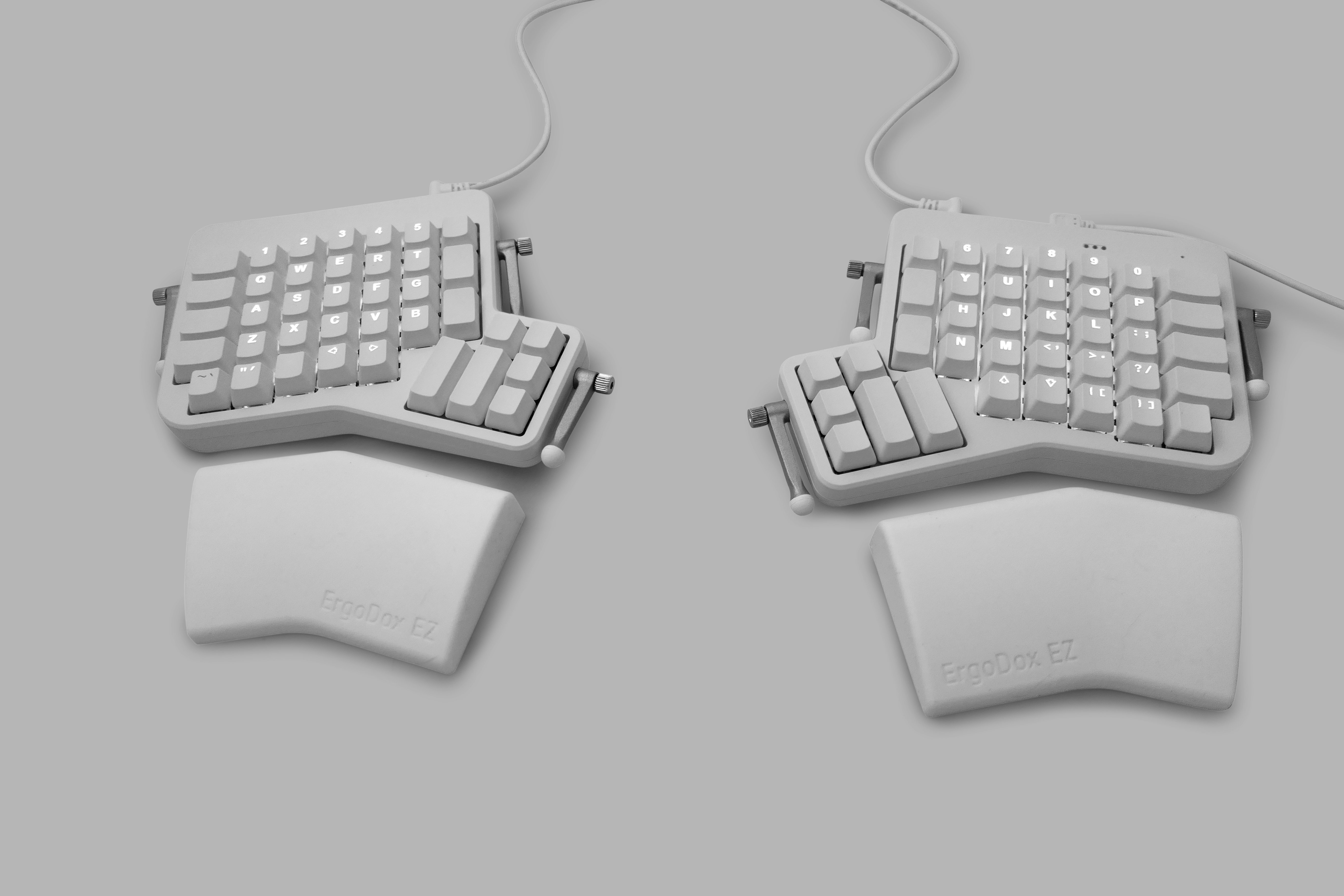 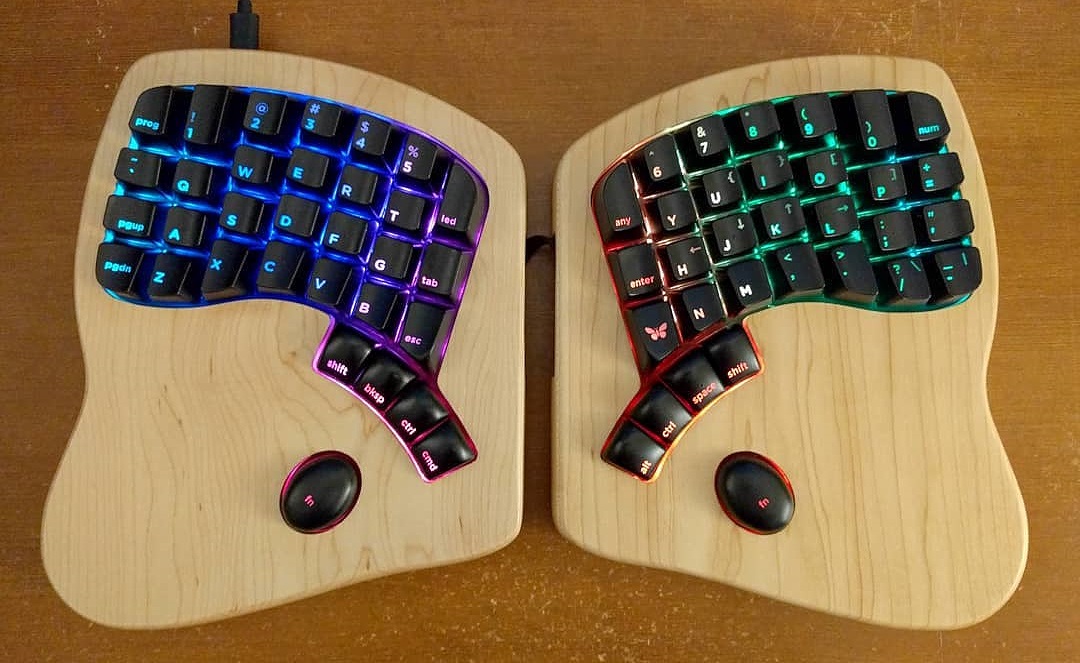 The smallest purchasable mechanical keyboard I know of is the Atreus 2. It was designed by my college friend Phil so he could use a mechanical keyboard when working on his laptop from coffee shops. It’s conveniently about to be mass-manufactured by the Keyboard.io folks, with a Kickstarter that begins in a few days. I built one last month, laser cutting the case from maple and soldering on Kalih blue switches, and posted some pictures of that build if you’re interested.

Almost as small is the Planck EZ, from the ErgoDox EZ folks. The physical case is a perfect rectangle and the keys are in straight rows and columns (“ortholinear” in mechanical keyboard-speak).

I am obsessed with keyboards and know all this already

Okay now we’re getting pretty out there, up against the boundaries of keyboarding that’s possible today. My personal wishlist/buildlist is a Mitosis (split, smaller than ergodox, but 100% wireless), and a Dactyl Manuform (an open source attempt at shaping around your hand via 3d printing, requires completely manual wiring). Fun, huh? 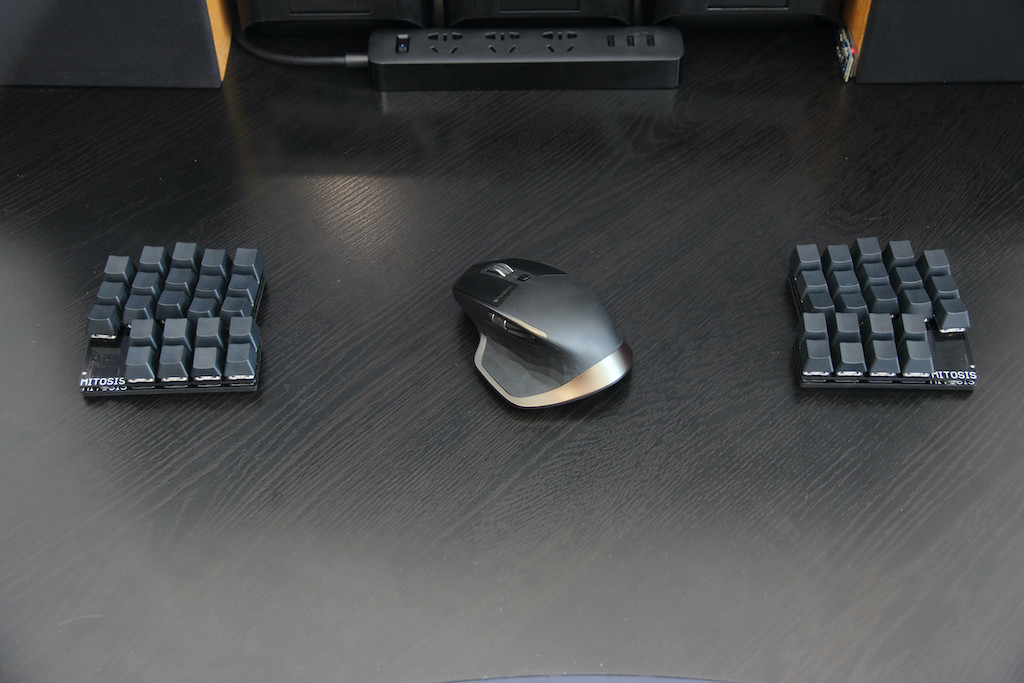 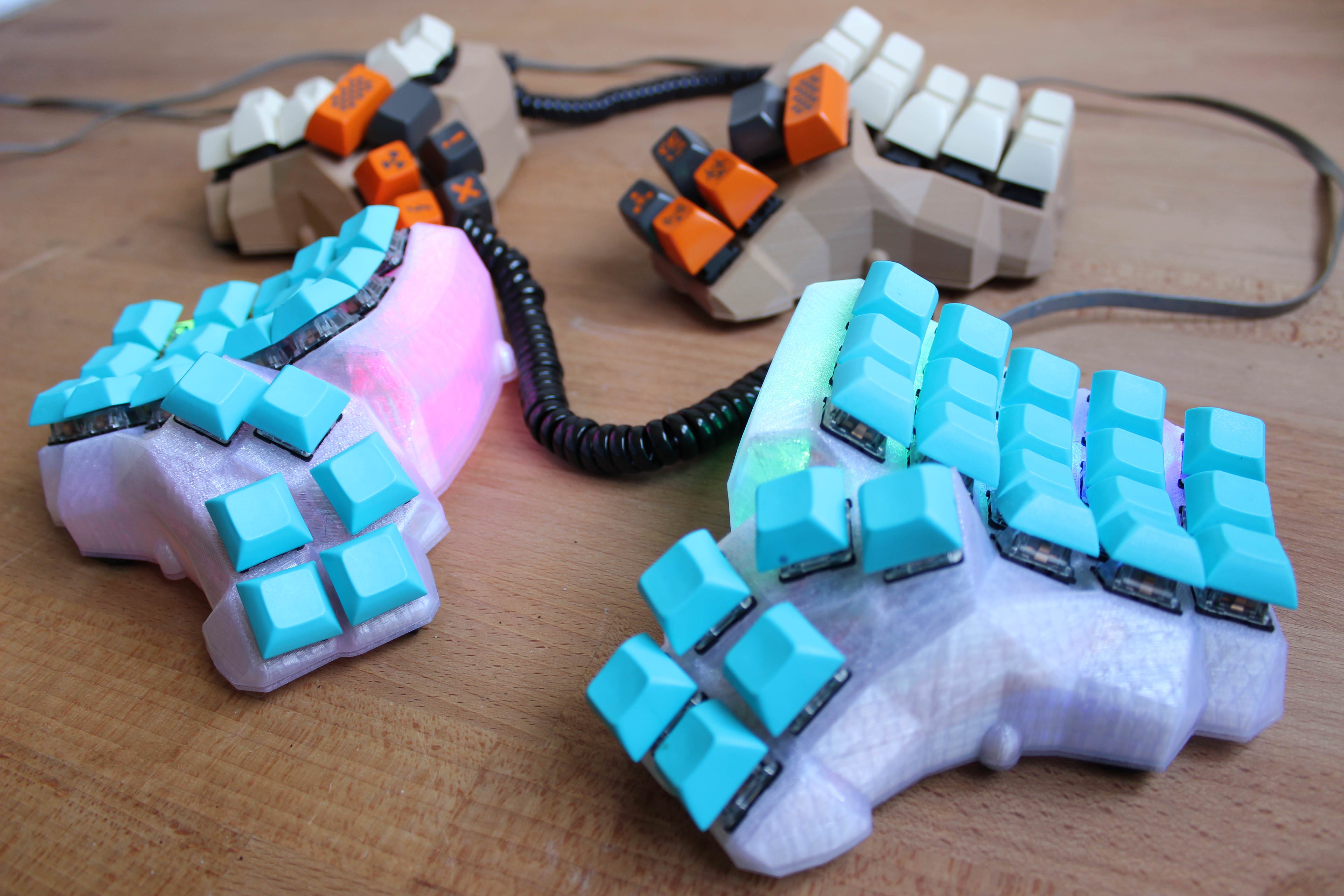 I just realized we haven’t even started to touch on firmware, switches, or keycaps yet, but that’ll have to wait for another post. See you next time!