A couple of months ago, I built a webapp from scratch using Rails 7. In addition to leaving Node out of my Rails app, I wanted to use GitHub Actions as the only CI for a real webapp that other people use.

I started where you might expect, going to /actions/new inside my repo and searching the GitHub-provided starter actions for “Rails”. Somehow, even though Django and Laravel apps had one-click CI, the Rails starter workflow… runs Rubocop. And Brakeman. And no tests. I guess linting is better than nothing, but that is extremely not CI, and definitely does not help me know if it’s safe to deploy my app automatically.

Annoyed, I went to search for a public GitHub Action file that I could copy and paste into my project. Somehow, all the blog posts I could find were about the beta version of GitHub Actions, and none of the YAML files actually worked. On top of that, every single blog post told me I would need to make changes to my app’s code so that my tests would run. I know enough about Rails to know that is absolutely not true, but apparently no one who knew that ever wrote about it somewhere easily findable with a search engine.

At that point I was annoyed all the way into action: I frankenstiened together three different blog posts and then started deleting everything that seemed unneeded or would require changes to my code. By the time I was done, I had a pretty concise YAML file that 1) worked with any Rails app out of the box, 2) supported both minitest and rspec without any changes, and 3) ran security checks and lints in a second parallel job, so everything finished faster.

Once I had a working action, my first thought was to simply post it here… but then I realized I could fix the one-click workflow offered by GitHub itself to actually run tests instead of just linters! So I went and spent four days getting my pull request accepted, and now there’s a gloriously straightforward two-click way to test your Rails application with GitHub Actions. Phew. 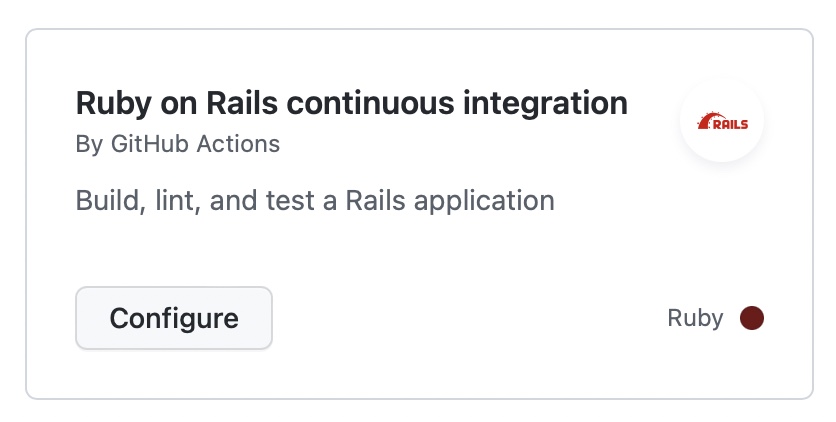